The Datum And The Katum

The datum is the most abstract element of data. A datum has no content of its own, and is totally defined by links to other datums.

Objects are datums that we (or our computers) have built in understanding of them. For humans, they are what we can sense; images, sound, etc. For computers, they are ones, zeros and machine instructions. For Datumtron API, they are primitive data types, for example, integers, strings, DateTimes, etc. Objects are represented in their native representation as “objects” and are attached to datums. A datum can have zero or one object.

In the Datumtron API, a datum that has an attached object is called katum. The “k” is to symbolize that it is a knowledge element since we have built-in knowledge about its object. 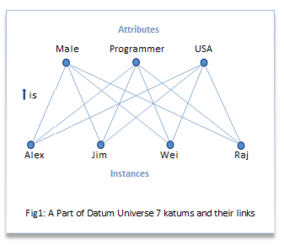 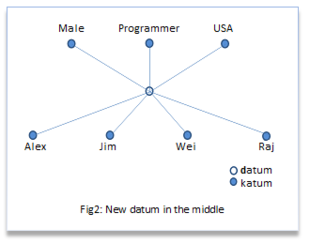 In Figure 1, all nodes are katums since they have strings attached to them (“Male”, “Programmer”, “USA”, “Alex”, “Jim”, “Wei”, “Raj”). Of course, Male, Programmer, and USA are also instances of other katums; say Gender, Occupation and Country of residence. The individual programmer may have other attributes as well like instances of Salary. Since in this example, all individuals share the same three properties, we can classify them into one class as shown in Figure 2. The new element in the middle is a datum but not a katum; it doesn't have an object, and is shown as a hollow circle. We can think of this datum as the class containing USA Male Programmers. It can be converted to a katum, if we attach a label to it.